Learn how to make a slow cooker spiral ham with this delicious recipe! The ham slow cooks during your busy day and comes out with great flavor thanks to the tasty honey mustard ham glaze.

Last Thanksgiving we hosted a big group at our house. Naturally, we made a TON of food. We roasted an Apple Cider Sage Brined Turkey. And smoked a Turkey.

But we also made this super easy, crowd-pleasing Slow Cooker Ham with Honey Marmalade Mustard Glaze. I wanted to share the recipe again, because I know many people don’t think about ham when it comes to Thanksgiving.

However,  if you’re looking for a simpler solution than roasting a turkey — I know it can be intimidating if you’ve never done it before! — this Crockpot spiral ham is a great option!

This slow cooker spiral ham with honey mustard glaze also works well when you want something a little smaller than a huge bird. Or if you want a lot of variety. Or maybe you just want to change up your Thanksgiving menu.

I love how this recipe just sits in the slow cooker for most of the day. I probably won’t ever make a ham in the oven again because this slow cooker ham is so easy and so good. The meat is really juicy and tender, and the whole house smells great.

The homemade honey mustard ham glaze makes such a difference and gives the meat amazing flavor!

All you’ll need for this easy slow cooker ham recipe and the honey mustard ham glaze is:

How Much Ham Per Person?

For bone-in hams, you should plan on each person eating roughly 3/4 pound of meat. For boneless hams, round that estimate down to about 1/2 pound per person.

How to Cook Ham in a Slow Cooker

Cooking ham in a slow cooker couldn’t be simpler! If you’re wondering how to cook spiral ham without drying it out, a slow cooker is the answer.

First, you’ll will combine all of the honey marmalade mustard glaze ingredients in a saucepan. Then, cook until the sugar is dissolved.

After you place the spiral sliced ham in the slow cooker, use a pastry brush to baste the ham all over with the glaze. Make sure you get the glaze not just on the outside, but also in between the spiral slices.

Then, the slow cooker does all the work for the next 6 – 8 hours. You can baste periodically if you like, every couple hours. That helps keep the ham from drying out, and makes it really flavorful.

Once the ham is done, remove it from the slow cooker. Place it on an oven safe platter. I like to thicken some of the cooking liquid with some cornstarch to make a really thick glaze.

After thickening the glaze, I baste that all over the top of the cooked ham. Place the glazed ham in the oven on broil until it gets nice and sticky. It makes the outside of the ham look really shiny and attractive.

You can also thicken and of the extra cooking liquid to serve alongside the ham at the table.

What to serve with Slow Cooker Ham

If you’re looking for holiday recipes to pair with this ham recipe, definitely take a look at the Thanksgiving Recipes and Christmas Recipes in the recipe index for some ideas. You can also check out my Thanksgiving Recipe and Planning Guide for even more holiday tips!

A few Thanksgiving sides my family loves to eat alongside this slow cooker spiral ham are:

How to Reheat Ham

You have a few options for reheating ham. You can either reheat it in a slow cooker, or in a 325 degree F oven. If reheating this ham recipe in the oven, you’ll want to bake it for roughly 10 minutes per pound of ham.

Can You Freeze Leftover Ham?

Yes, very easily! If you wind up with leftover ham, slice it up and wrap it in aluminum foil. Store the foil-wrapped ham packets in a freezer bag and freeze. I like to wrap the ham in foil first so it’s easy to take a little out at a time to thaw for sandwiches, soups, and more.

How Do You Store the Leftover Ham Bone?

The ham bone will stay good in the freezer for about a year, so just make sure you use it within 12 months for the best quality. You can extend the life even longer by sealing the leftover ham bone with a vacuum sealer.

What Should I Make with Leftover Ham?

This Easy Loaded Baked Potato Soup Bar makes for a super simple and fun family dinner. Dress up your bowl of soup with all the delicious toppings traditional to a loaded baked potato. Leftover Ham makes a great add in!

Slow Cooker Ham Soup with Potatoes and Kale is both easy to prepare and flavorful, thanks to the use of a slow cooker. The broth is super rich if you save the ham bone because it will add a ton of flavor to this soup recipe.

This Cheesy Ham and Broccoli Calzone recipe was perfect for using up leftovers! I love the gooey cheese that oozes out when you bite into the calzone.

Growing up we always had Split Pea Soup with Ham to use up leftover ham after the holidays. Load it up with carrots, onion, potatoes, and plenty of diced ham. Perfect for a cold winter night! Save the ham bone for this soup so you can get extra flavor in your stock!

These Make Ahead Mini Ham and Spinach Breakfast Pies are super easy to prepare because they use Bisquick baking mix. They can be made ahead and reheated on a busy morning if you don’t want to get up early and they are really yummy. The store well in the freezer, too!

You’re welcome to buy a bone-in or boneless ham for this slow cooker ham recipe. Just make sure the ham is already spiral cut, as that can be a little tricky to do yourself.

Make sure to use the full amount of honey and sugar called for in the honey mustard ham glaze. Now’s not the time to cut back on the amount of sugar in your food. You need all the sugar in the glaze to create a beautifully sticky coating on the ham.

If you don’t have space in your oven to broil the slow cooker spiral ham just before serving it, that’s fine. You technically don’t need to broil the ham, I just prefer doing it to help the edges crisp up.

“Love luv this glaze…..it is just my husband an I so making a whole ham doesn’t happen often. I bought about small boneless quarter of a kentucky legends ham, sliced it 1/4 to 1/2 in. slices. Placed in a shallow bake pan, coated an baked for 30 min 375 turning and coating every 7 min.. ..dear hubby loved it! i make it about once a month now…Thank you!”

Looking for some other ideas to serve for Thanksgiving alongside this slow cooker spiral ham recipe? Check out a few of these favorites:

This Rosemary Beer Brined Smoked Turkey is a favorite at our house! It takes a little extra time to prepare, but it’s worth the effort.

If you do make a turkey this year, here’s everything you need to know about making Homemade Turkey Gravy. It’s simple to prepare, and way better than anything store-bought.

Does your family make special drinks to accompany your turkey dinner? If not, you should! Start with this Spiced Pomegranate Apple Cider Mulled Wine. It tastes like fall in a cup!

Skip the store-bought Hawaiian rolls this year, and make a batch of Sweet Potato Dinner Rolls instead. They’re easy to make, and they pair wonderfully with any Thanksgiving dish.

For dessert, whip up a batch of Pumpkin Pudding or an Apple Crisp. Both are easy to prepare and everyone loves them!

What’s your favorite dish to enjoy over the holidays?

Be sure to follow Good Life Eats on Instagram. Tag @goodlifeeats and include the hashtag #goodlifeeatsrecipes so I can see what you’re cooking up in YOUR kitchen!

Did you make this recipe? Leave a comment below and let me know what you thought! 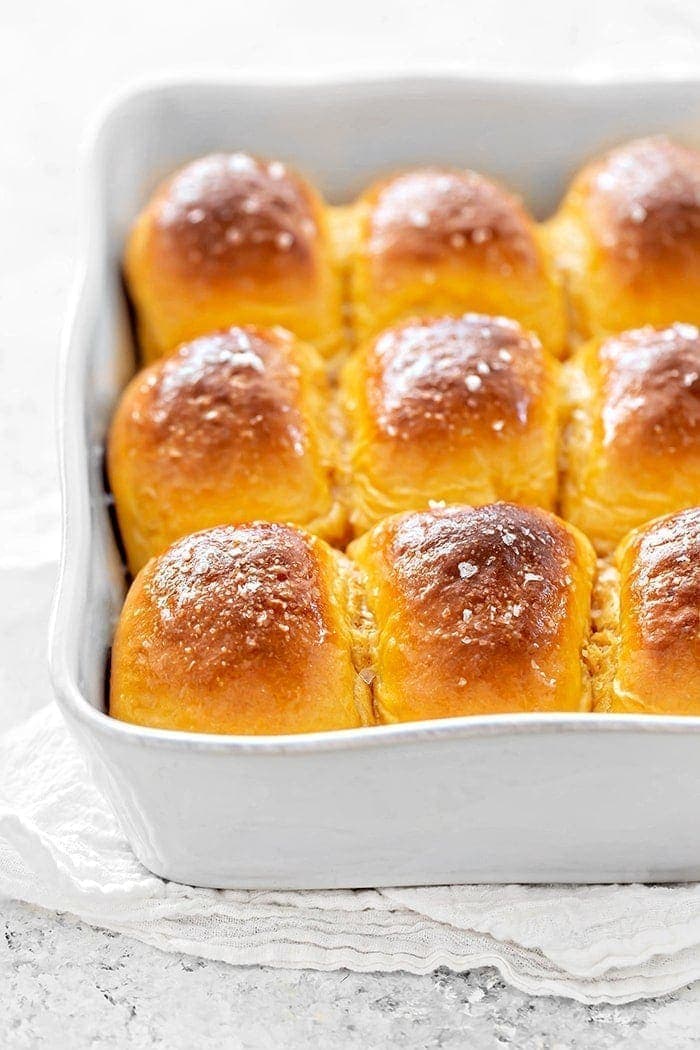 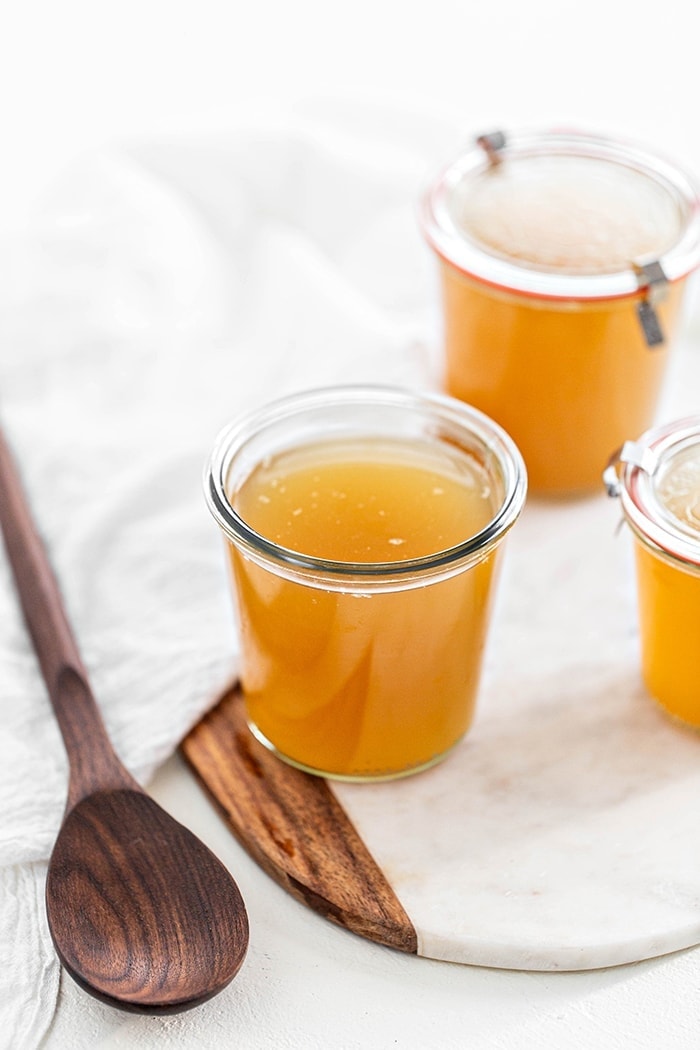 Next
How to Make Easy Homemade Turkey Stock
Click here to cancel reply.

This looks so good but, what do you suggest in lieu of the mustard. My husband hates all mustard??

I suppose you could leave it out.

Does the ham need to be pre-cooked or can I put a raw ham in using this recipe?

In my experience ham is usually precooked but it is cold from the grocery store. I always use a pre-slice spiral ham in this recipe. Unfortunately I haven't seen a raw ham so I can't comment on that.

a gorgeous recipe, whether for Thanksgiving or not! Thank you for this recipe, haven't made this type of ham recipe in years, great reminder!

I want to do this Thanksgiving morning, but will need to use the oven as my ham is too big.  Any suggestions on how long to oven bake?

It depends on what temperature you are wanting to cook the ham at. If you cook it very low, around 225-250 degrees F, in the oven in a dutch oven with a lid, you can cook it longer as if you are slow cooking it. If you want to cook it for less time then you would increase the heat to 350 degrees F and cook it around 10-15 minutes per pound. Hope that helps. Enjoy!

I would love to try this recipe for Thanksgiving. But we will be in an RV for the holiday and the oven is not big enough, and has no broiler option. If we skipped the oven step would it still work? Or any suggestions? Thanks!

Yes, you can skip the oven/broiler. Just boil and thicken some of the glaze in a saucepan, with cornstarch wisked if necessary, and serve with the glaze. Does that make sense? Enjoy and Happy Thanksgiving!