I love all kinds of doughnuts, with the fried yeasted type being my favorite. The problem with making homemade fried doughnuts, at least when you don’t live with several people, is that you’re left with at least a dozen not very fresh doughnuts the next day. And that’s where baked doughnuts come in.

Most recipes for baked doughnuts, including this one, yield 6, which is just the right amount for two or three people. If you have kids, double the recipe and you’ll be set. And if you don’t have a doughnut pan, you can use a mini muffin pan to create doughnut holes. 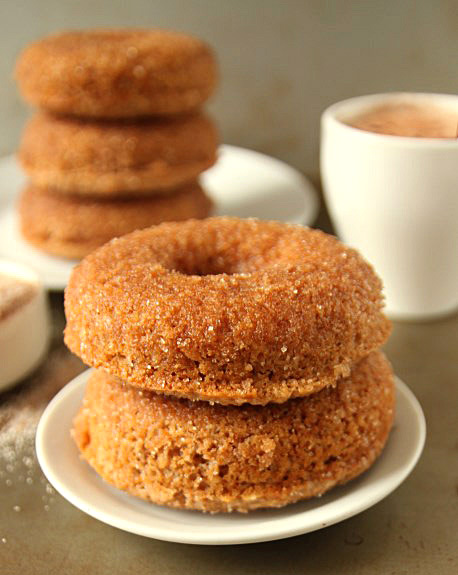 Written by: Erin of Texanerin Baking

These are highly adaptable. If you’re not a fan of cinnamon sugar, skip the cinnamon and try a different version. Dried or fresh berries with lemon zest and lemon extract would make an excellent variation. The doughnut itself is sweet enough as is, but you can lightly dust the doughnuts with powdered sugar right before serving just to give them a finished look.

I have to admit that I wasn’t expecting much from these doughnuts. I often make cake doughnuts and although I enjoy them, the texture seems to be a little off most of the time. However, these doughnuts have a wonderfully tender crumb and are nice and light, which isn’t something I’ve experienced with most baked doughnut recipes.

If you’ve made baked doughnuts before, you know that texture usually changes on the second day. That isn’t a problem with this recipe as they’re almost as good and fresh on the second day as they are on the first. 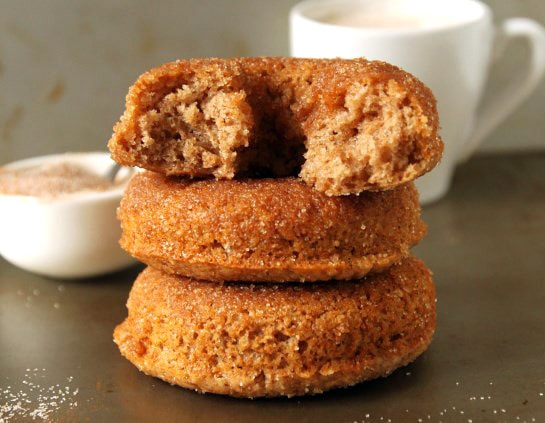 These doughnuts don’t have yeast and come together very quickly. There’s no rising time, no kneading, and no frying. In the morning, almost instant gratification is a huge plus, especially if you’re in a rush to get out the door!

Doughnuts, whether fried or baked, aren’t exactly healthy, but whole wheat flour adds a little nutritional value to this recipe. But don’t worry, the whole wheat flour doesn’t compromise the taste at all, as the cinnamon covers up any traces that these have been made in a healthier way.

Can i use regular plain yogurt instead?

That should be fine

Thanks for the recipe. I can't have yeasted bread or refined white flour, and I've been missing donuts soooo much...

I love doughnuts and these look gorgeous. I've added a link to your recipe at http://cakeandcalico.co/linkswelove if you feel like having a peek.

I've never tried making doughnuts before, and I've always been wary of store-bought ones. This is one recipe I'm going to try out. Thanks for sharing this.

Danke Erin and Katie for posting this fabulous recipe. Love baking donuts. Very glad to have a recipe now which features wheat flour and Greek yogurt. I've had great success with those two items in cake but sooo glad to have them in my donuts now =)