This Balsamic Roasted Mushroom Risotto recipe is dedicated to my dad. He absolutely despises mushrooms. When I mentioned this recipe he said “the balsamic roasted part sounds good.” I’m convinced that if he’d just give mushrooms an unbiased try he wouldn’t think they are nearly as horrible as the memory his mind has conjured up and elaborated upon for the better part of his life.

Roasting the mushrooms for this risotto brings out such depth of flavor that sauteing alone can’t. Combined with the flavors of olive oil garlic, rosemary, and balsamic vinegar, these mushrooms are incredibly rich tasting. 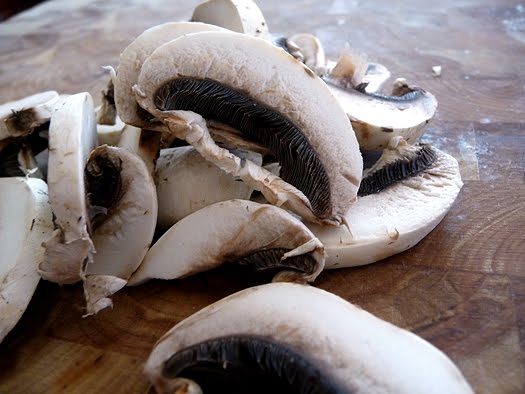 Risotto has a reputation for being a time consuming dish to prepare, and it’s a reputation well earned. Adding 1/2 a cup of broth at a time, stirring until it’s completely absorbed, and then repeating until you’ve used all your broth is most definitely a boring and tedious task necessary to the recipe. 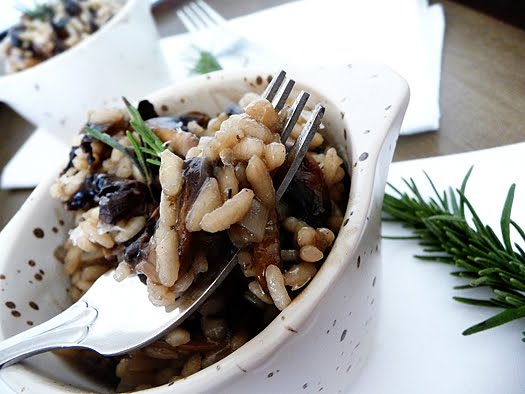 However, I will tell you that there is nothing difficult about about making risotto. It’s simple enough for a weeknight dinner or weekend lunch. This recipe can stand alone as a meatless meal itself for 4. As a side, this recipe serves 6-8 along with a green salad and a meat of your choice, personally I think a small grilled steak with blue cheese would be most pleasing to the palate in combination with the risotto.

If you are like my dad and don’t care for mushrooms, I think this just might be the perfect recipe if you are willing to give them another chance. 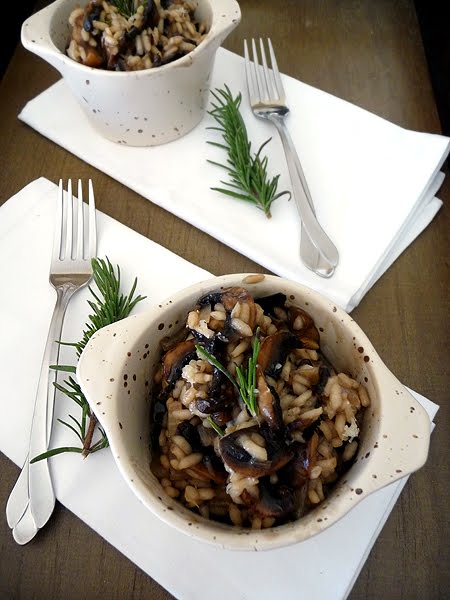 Remove stems from mushrooms (discard) and thinly slice the mushrooms. Combine with garlic and rosemary. Toss with 1 1/2 tablespoons olive oil and balsamic vinegar. Place on a foil lined baking sheet, spreading the mixture out, and roast for 20 minutes.

Meanwhile, combine the broth and water in a saucepan over medium-low heat until warmed. Heat the remaining oil (1/2 tablespoon) in a large saute pan over medium-high heat. Saute the shallot, about 1 minute. Add the rice, stirring to coat with oil, and cook about 2 minutes. When the rice begins to take on a light golden color, pour in the wine, stirring constantly until the wine is fully absorbed.

Remove from heat and stir in the butter and romano. Season to taste with sea salt and black pepper. Serve immediately.