This was a fantastic taco recipe and a nice change of pace from the typical ground beef tacos with lettuce, tomato, avocado, cheese and salsa that we usually have. The Tomato-Corn Salsa is a delicious medley of fresh flavors. We used a mixture of grape and yellow pear tomatoes from our garden, sliced in half. It made for a beautifully colored salsa that was quite filling. 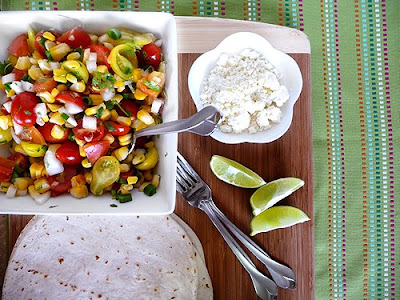 The original recipe called for poached chicken, but I knew I wanted to grill the corn – it really brings out the sweetness – so I figured that marinated, grilled chicken would taste so much better. The Cilantro-Lime marinade kept the chicken moist and tasty and added another dimension of flavor to the dish. Crock Pot Mexican Chicken is another great chicken recipe for tacos 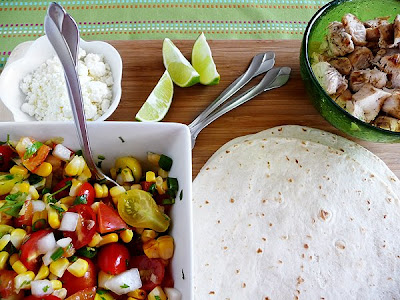 I like to cook vegetarian once a week. It’s cheaper and faster, usually. So I started thinking how I could change this for a faster, weeknight meal. I think that garden zucchini cut in large strips (brushed in olive oil and seasoned to taste with salt, pepper, and cumin) or black beans would be great substitutions for the chicken if you’re in a bit of a crunch and don’t have time for marinading the chicken, or if you’d simply rather a meatless meal. 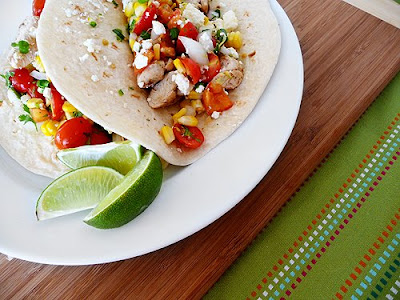 Prepare the marinade. Place chicken in marinade and refrigerate for 2 hours, or up to 24.

Preheat the grill. Toss together the tomatoes, minced jalapeño, cilantro, and onion. Season to taste with salt, and add 1 tablespoon fresh lime juice.

Rub corn with butter and sprinkle with salt and pepper. Wrap in foil and put on the grill, turning every 4 minutes. Grill until tender, golden, and slightly browned.

Cut corn off the cob and add to tomato mixture. Slice chicken into strips, place in a bowl and toss with 1 tablespoon of lime juice.

Warm tortillas in a tortilla warmer or by wrapping in damp paper towels and microwaving for 30 seconds on high heat. Place one or two on each plate, top with shredded chicken and a generous spoonful of the salsa, and sprinkle cheese on top. Serve, passing additional salsa if there is any at the table.

Put all ingredients in a food processor and blend until smooth. Pour over chicken in a resealable plastic bag and let marinade in the refrigerator for at least 2 hours, or up to overnight.