My first experience with a frittata didn’t go so well. At the time I though that I just didn’t like frittatas, but after making this recipe I realized that the first just lacked flavor. This frittata is packed with so many flavors. I definitely won’t be going another five years without making one. Great for any meal. We had ours for dinner, but it would be a lovely breakfast or brunch recipe too. 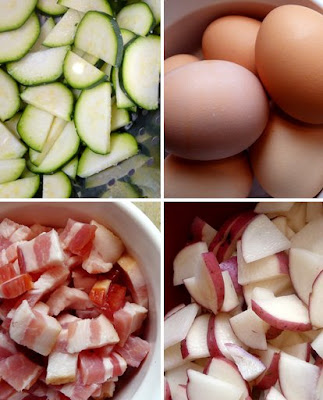 Salting the zucchini helps release excess water so the frittata doesn’t become watery. I used some center cut bacon because I had that on hand. I like to buy center cut when I do use bacon because it is less fatty. Just that little bit of bacon really added a ton of flavor.

Zucchini-Potato Frittata
from Serving Up the Harvest, via thekitchn.com 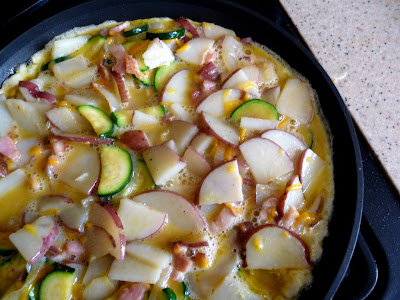 Combine the zucchini and 1 teaspoon salt in a colander and toss well. Set aside to drain for 30 minutes. Heat 3 tablespoons of the oil over medium-high heat in a large, well-seasoned cast-iron skillet or ovenproof nonstick skillet. Add the potatoes and onion, reduce the heat to medium-low, and cook, flipping and stirring occasionally, until the potatoes are soft, about 20 minutes.

Keep the skillet over the heat. Beat the eggs and pepper to taste in a medium bowl until well blended. Fold in the potatoes, zucchini and Canadian bacon, and cheese. Preheat the oven to 350°F. Add 1 to 2 tablespoons of the remaining oil to the skillet as needed to lightly coat the bottom. Pour in the egg mixture, reduce the heat to medium-low, and cook without stirring until the bottom is set, about 10 minutes.

Transfer the skillet to the oven and bake until the top is set, 5 to 15 minutes, checking every 5 minutes. Place a serving plate on top of the skillet and carefully invert. The frittata should fall out of the pan. Cut into wedges and serve.