Yesterday Logan and I made chocolate covered strawberries. I’m always trying to find ways to curb his picky eating tendencies. He’s eaten a couple strawberries from our garden, but doesn’t eat them of his own will when we purchase them. As baby he LOVED them. Couldn’t get enough. Along the way he’s become more and more selective with his food choices. For the past year, we’ve gradually been attempting to build them back up, but it’s hard work. It’s also very frustrating. That said, he loves chocolate. I thought we could try making chocolate covered strawberries as an activity together. Maybe he’d like to try a bite if he helped cover them in chocolate. 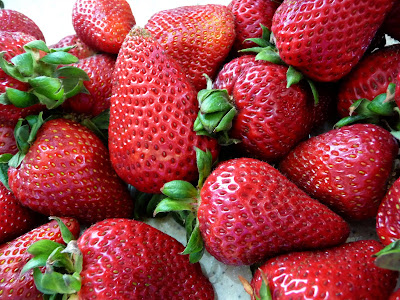 The activity wasn’t as well received as I’d hoped. At first he wasn’t sure he wanted to dip the strawberries at all. In the end, it entertained us for a few minutes. It wasn’t a complicated and involved activity and took just a few minutes to set up and clean up. 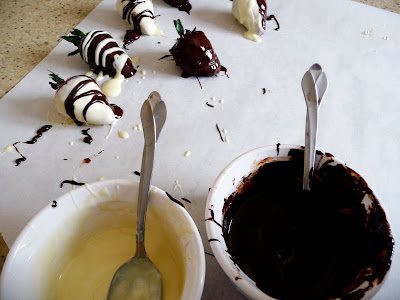 What I’ve learned from activities like this is that in the end what matters most is that we’re spending time together, no whether or not he tried the new food – though I won’t deny that it would really seal the deal for me if we had a fantastic time together AND he sampled the food. In this instance it served as an opportunity to build a bridge over some hurt feelings on both our parts from an earlier meltdown (Logan’s, not mine). We had a fun time drizzling chocolate and licking spoons, even though he wasn’t interested in sampling his handy work. Looking on the bright side – Eric, Madeline, and I had 10 chocolate covered strawberries to share after dinner last night. 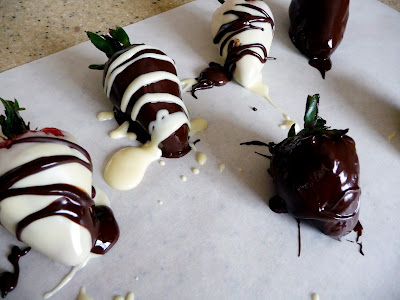 Melt semi-sweet chocolate and 1 1/2 tsp shortening in a bowl in the microwave. 30 seconds on full power. Stir and repeat. Do the same with the white chocolate.

Dip strawberries and lay on parchment paper to cool. Drizzle with the opposite color chocolate for a pretty look.

When done, store in refrigerator if you haven’t eaten them already! 4 year olds like to lick the spoons and bowls when done. This is a great dessert that doesn’t involve turning on the oven on a hot day. 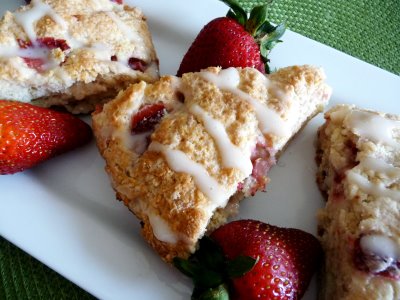 Great! You are definitely linked, as well as your button. :-) I'll post it tomorrow!

Lindsay - I am happy to let you use the photos as long as goodLife {eats} is linked and it is noted that the photos are copyright to me. Thanks!

These look SO good! :-) Do you mind if I use a photo from this post and your strawberry scones post to link to you and these recipes in my blog? :-)

Why do kids have to go through that phase?Although some, like my husband, never grow out of it. I think that's because his mother didn't try to help him out of it so you're doing the best thing for the situation!Chocolate-covered strawberries are always so pretty it's almost a shame to eat them. Almost.

Poor little guy. At least you tried, and if he had fun for a little while, I'd say it was a success! Thanks for the idea!