February 12, 2009
A few nights ago I started having visions of heart shaped brownies as I was drifting off to sleep, fantasizing about what a cute idea it would be to send them with Logan to preschool on Thursday for his Valentine Party. The next morning I saw that Recipe Girl had the same idea – only she stepped it up a few notches and dipped them in melted chocolate. And decorated with sprinkles. YUM! 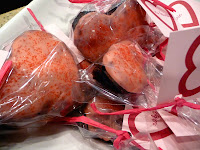 I used this brownie recipe –  the recipe was doubled and baked in a 9×13 pan lined with foil. Because Logan has a peanut allergy, I have a hard time finding unsweetened baking chocolates that aren’t processed with peanuts, and we had everything on hand for the other recipe without a trip to the store. 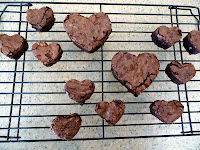 Impatient as all 4-year-olds can be, we couldn’t bear to wait to chill the brownies in the fridge as Recipe Girl suggests. We cooled them on a wire rack for 15 minutes, then lifted the brownies out of the pan and let them cool for about 10 more minutes before we cut them out with the cookie cutters. I think if we had chilled in the fridge, that the top of the brownies wouldn’t have cracked as much, but sometimes that’s just how it goes. We also needed a deeper cookie cutter, ours only cut half way through and I cut the rest with a knife. 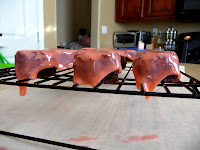 I also added some vanilla extract, red food coloring, and a few splashes of half and half to the white chocolate chips. The half and half was because our chocolate was a little too thick upon melting and we needed to thin it out a bit. Logan thought pink hearts with red sprinkles would be best. 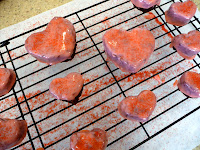 We made mini hearts for the kids in his preschool class and large hearts for the teachers. I figured that the teachers would probably need a good dose of chocolate to get through AM and PM preschool classes with a bunch of 4-year-olds who will no doubt arrive at school experiencing extreme Valentine Party fever.
Logan and I had a fabulous afternoon together preparing these. He was so excited this morning to go to school and share them with his friends. All in all it was a project well done!

Hope you all have a fabulous Valentine’s Day!