For some unknown reason, I had the desire to:

I don’t particularly love the taste of soggy, eggy bread.

If covered with enough butter and powdered sugar or syrup it is tasty enough.

I wanted to properly enjoy a delicious plate of french toast.

Something like this French Toast with Caramelized Pears and Pecans. 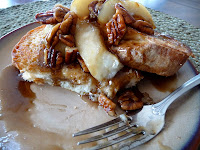 Reminded of the time Eric’s mom (who is an excellent cook!) made us a delicious french toast with pear and brie and having an excess of pears purchased at Costco, I decided I wanted some sort of pear topping to go along with it.

Positive that a thick, rustic bread was necessary for this experiment, and lucky enough to have just made some the day before (though there’s no need to bake your own just to make this recipe.

I’m pretty confident that some bread from here would make excellent french toast – our Costco sells it!).

I got busy experimenting on what in my mind was the perfect french toast. 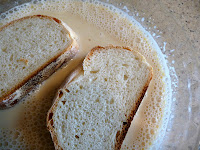 I think this recipe for French Toast with Caramelized Pears and Pecans can be pretty flexible if you want it to be.

I bet green apples would be a wonderful substitution.

Substitute them with another nut that you love.

Top it with whatever you love.

It’s all about eating what you enjoy.

As it happens, we particularly enjoyed it this way.

No more soggy, eggy french toast for me.

Experiments that go well, like this French Toast with Caramelized Pears and Pecans, pretty much make my day. 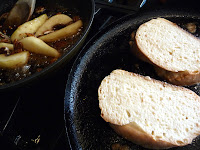 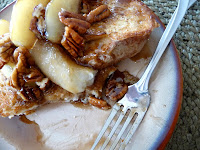 Heat a skillet over medium heat.

In a bowl, whisk together milk, egg, and vanilla.

Pour milk mixture in a shallow dish, such as a cake pan or pie plate.

Soak the bread in the milk mixture for about 20-30 seconds per side.

Melt 1 Tbs butter in the skillet.

Transfer the soaked bread to the skillet.

Cooking about 2 minutes per side, or until golden brown.

Add more butter to the skillet for each batch.

Serve with caramelized pears and pecans. 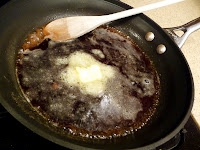 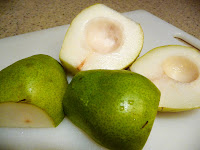 Heat the butter, sugars, and water in a pan over medium heat, stirring until sugar has dissolved and ingredients are combined.

Bring to a boil, then turn the heat to low and allow the sauce to simmer and thicken while you prepare the pears, stirring as necessary.

Cut into halves and core.

Cut each half into quarters.

Place pears cut side down in the caramel sauce and allow to simmer for 3 minutes.

Flip pears to the other cut side and simmer 3 minutes more.

Serve pears with caramel sauce on top of french toast.

10 Back to School Breakfast Ideas (Make Ahead & Freezer Friendly)