This recipe for Pumpkin Cobbler is an easy dessert that is perfect for fall!

Have you ever felt that you’re so utterly engrossed in the task at hand that nothing could distract you? As a mom, I know better. It’s a rare occasion that I’m not interrupted at least once when I’m busy doing whatever it is I’m busy doing.

Even the mundane things. It’s hard to not be annoyed by the disruption, and I’ll be honest: I almost always fail in the not being annoyed (at least internally) department.

I know I’m not the only mom out there feeling like if she could just not be interrupted that she’d get whatever thing it is done a million times faster.

Okay, maybe more like a dozen times faster. It’s just a rule: interruption happens and mom’s plans are messed with.

Sometimes…you are interrupted for a very, very good reason. Minding my own business, making a pumpkin cobbler that I’ve been dreaming about oh for the past week or so and I hear that cry. That cry that means something is terribly wrong.

The terribly wrong thing being that Madeline flew off the glider of our swing set and hit her head on the wood boarder that surrounds the play area.

(For the sake of any finger pointers out there, yes she was absolutely 100% supervised by an adult. In a freak accident she tried to get off while the glider was still swinging. If you’re a parent, you know, that sometimes things like this just happen no matter how careful you are, and when they do – it’s heartbreaking.)

So, we spent the evening in the ER as suggested by the nurse at our pediatrician’s office. We didn’t want to take any risks. She hit her head pretty hard and seemed a bit confused.

When I hear talk of x-rays and CAT scans, I can’t think of anything other than: how in the world did we get here tonight? and…I hope we don’t catch whatever bug everyone else has that is in here sick.

In the end she turned out to be just fine. Her pupils were very responsive, she wasn’t bleeding, no bones were broken, and after a little time in our room in the ER she was back to her normal happy, bubbly self and she didn’t need any crazy scans.

It could have been 10 times worse, but we were so lucky!

Now, where were was I? The pumpkin cobbler, that’s right. It didn’t make it for dessert that night as planed. Heck, we didn’t even eat dinner until after 8 pm by the time the partially started Chicken Pot Pie was out of the oven.

Kids were even in bed before dinner was ready, so we weren’t really thinking about dessert. But it sure did make a good breakfast the next morning. And this time it was really dessert for breakfast, not just breakfast that tastes like dessert.

Be sure to check out these 25 Pumpkin Recipes to Try this Fall – So, if like me, you have a pumpkin hoarding problem you now have a very good excuse. I’ve just shared my favorite Pumpkin Recipes for you to try this fall. 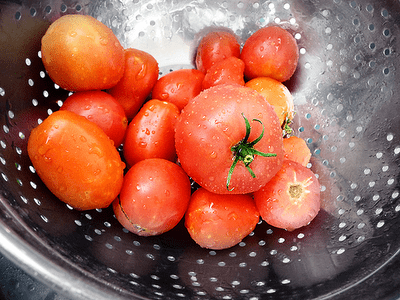 This recipe is EXACTLY what I was looking for! And accidents do happen. Mine was at 7 that ended with me in the ER having a sewing machine needle that had bent into an L shape removed from my finger. My mom heard that cry!! Freak accidents happen too fast!!

I have multiple food sensitivities, including dairy. Has anyone tried to substitute coconut oil for butter for something that crisps like the crumble topping? I was wondering if that would work? I would also have to use almond milk and egg substitute, but I think those would work with no problem. Thanks PS-My son fell on his head on concrete when trying to jump through the chains on a swing at an apartment complex. He spent the night in the hospital with a concussion and had headaches for a while thereafter, but no lasting problems. He is now father of six and has made many trips to the ER with his little ones. It's a fact of life with kids. Glad yours is OK.

I had bought a Gift Pumpkin cobbler mix that was marked down, - after Christmas. It was delicious. So in looking for a recipe, found yours. I will try it. Looks pretty much close to what that mix was, and probably even better. I'm thankful that your daughter is okay. My children grew up in spite of those type of accidents. And their children have accidents also. Stuff happens - even when they're well supervised. There better not be any finger pointers out there.

Oh goodness! I doubled the recipe and baked in a 9x13 at 375 and it took about 45-50 minutes. It turned out fantastic..Some of the crumb sunk a bit more than I would have liked..Maybe I'll bake it halfway next time before I add the streusel. I started eating it before dinner was even started! Shameful sweets are the best sweets. Good job on this recipe and thank you!

AH! Yes! Was looking for the standard cobbler recipe with the cake mix. realized I don't have a cake mix and found your recipe! Pumpkin Cobbler with regular pantry ingredients! Thanks for sharing!