This is the salad we had along with our Easter dinner. The recipe was adapted from one called Northwest Chicken Salad found in the Cooking for Two cookbook by Better Homes and Gardens. We received this cookbook as a wedding gift and used it a lot in our earlier years. The original salad is very good as well, but I haven’t made it for quite some time. This cookbook fell forgotten now that we have a family, but I want to pull it out again (and adapt the ingredient amounts to suit our family size) because it has some yummy meals in it. 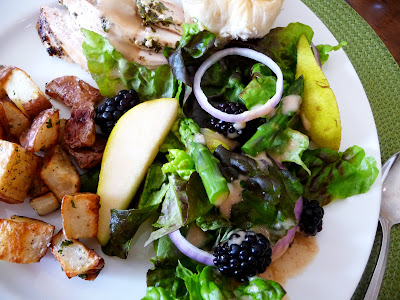 When I first came across the recipe I was a new wife with a bit of cooking experience (more than many other new wives I knew), though I have gained a lot more experience since then and become so much more aware in the kitchen. At the time, the thought of putting asparagus in a salad was such a new idea to me. I love coming across new ideas that stick with me and moving beyond the standard basics. Back then I was all about following a recipe. I’m glad that I’ve learned to look outside the box and use a recipe as inspiration and change things where I see fit. Sometimes it results in a completely different tasting, but just as delicious, dish. 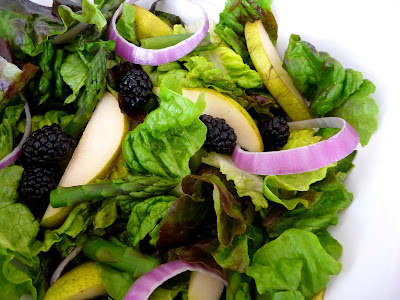 Cut blanched asparagus into thirds. Toss all ingredeints and serve with pear vinaigrette.

Combine all ingredients in a screw-top jar and shake well.

Maybe try the dressing with almond oil instead olive oil. That way the strong taste of the olive won't overpower the delicate taste of the pear. Great recipe though!

this salad is stunning!! i love the colors and i need to make this - STAT!

That sounds delicious! I am always looking for new dressing and salad ideas, and the pear dressing sounds amazing.