Here we go again, talking about our abundance of tomatoes. Are you sick of it yet? Don’t answer that. Would you be sick of all these tomatoes if they were yours? I’m not, because there are so many fresh tasting summer recipes to use them in before the season is over. Our latest tomato based meal was Garden Panzanella, an Italian bread salad popular during summer.

Essentially, Panzanella is cubes of dried out bread tossed with an oil and vinegar dressing, tomatoes, and basil. When described like that, it probably doesn’t sound too exciting. That’s where you’re wrong. This panzanella is packed with all sorts of fresh tasting flavor – salty olives, juicy tomatoes, fragrant basil, crunchy cucumbers, and sweet red onion. This dish was most definitely not lacking in flavor or appearance. 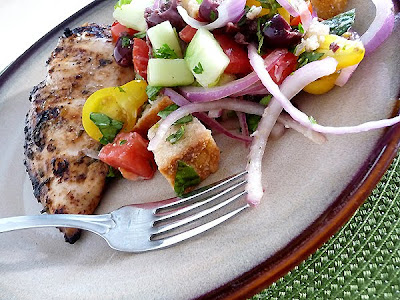 I adapted this salad based on the types of vegetables we had growing in our garden (or my neighbor’s garden) and was able to make quite a dent in our tomato supply. The recipe makes a lot; if you don’t think you’ll eat it all in one night, it’s best to half the recipe because this doesn’t do well as leftovers. It’s filling with the bread, but at the same time feels light and refreshing thanks to the ripe-from-the-garden herbs and vegetables. Served alongside grilled rosemary balsamic chicken it was a great summer meal. 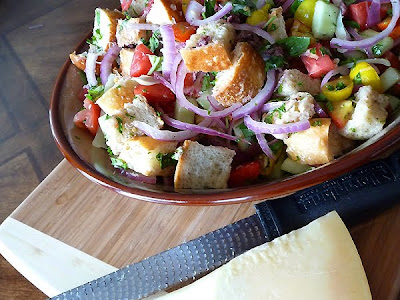